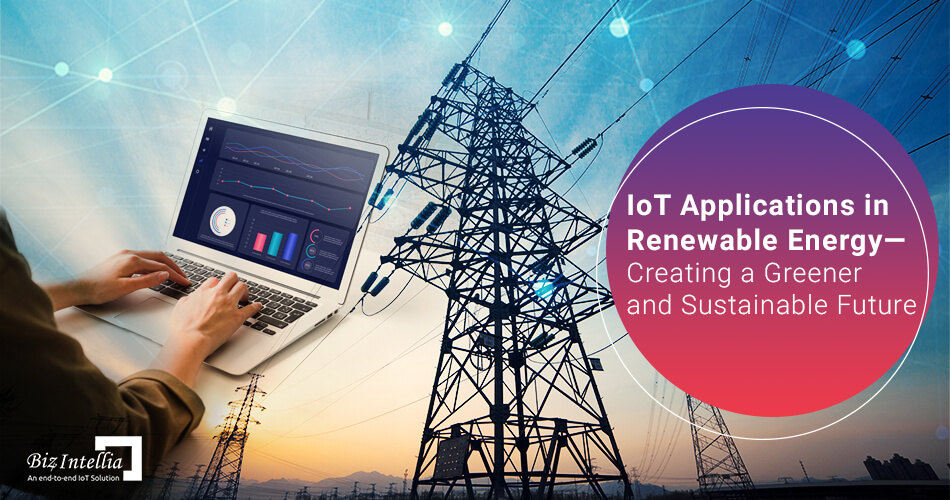 It wonâ€™t be an understatement to say that renewables will be the primary energy sources that will drive our future. Their adoption has been continuously soaring at an unprecedented rate and has enabled the creation of smart energy solutions.

They are surely a better alternative than the already limited non-renewable resources that emit harmful gases. The implementation of renewables is boosting at an astronomical rate; and that too in a cost-effective manner. In the past 18 years, the use of renewable energy sources has increased by 100 percent in US alone. In some countries, renewable energy is even cheaper than fossil fuels.

By using modern-day disruptive technologies, the embracement of renewable sources of energy can be enhanced even further. The integration of IoT in renewable energy segment is enabling its expansion to a great extent. Applications of Internet of Things mitigate several challenges that are limiting the acceptance of renewables.

Below are some of the IoT applications in renewable energy that are empowering the creation of a sustainable future:

Solar and Wind energy are the most popular renewable energy sources. Their abundance and reliability have helped them to flourish than any other renewables. In 2019, Germany sufficed a quarter of its energy demands from its windmill farms.

The cost associated with energy production through these resources has also decreased significantly. Since 1977, the cost of solar panels has lowered by 99%. Germany, China, and Japan are among the global leaders in using solar energy.

The assimilation of IoT in solar and wind energy systems along with sensors application can increase their reliability even further. In order to maximize energy production, most of the solar panels use dual-axis trackers. These tracking systems calibrate the angle of solar panels and help them receive the maximum solar radiation throughout the day.

IoT systems can be used to remotely regulate and control these tracking systems to ensure maximum energy production efficiency. By using analytics solutions, the movement of the sun can be tracked which can then be used to automatically adjust the angle of solar panels. Similarly, IoT in wind energy can be used to monitor several parameters that can affect power generation.

One thing that is restricting the growth of renewable energy is the unreliable transmission & distribution system. The traditional energy grids were built to support the one-way transmission of uniform energy from power plants and bill the customers once a month. These grids are hence not suitable to support the varying electricity supply from renewable sources. Let us understand this with an example:

Imagine a solar farm that transmits the converted electricity to users and store excess electricity in a battery for use at night. However, on a particular day, the panel wonâ€™t be able to generate the required amount of electricity if clouds cover the sky. This dependence of renewable energy on weather conditions can hence not be supported by the conventional electricity grids.

IoT has enabled the creation of smart grids that support manual switching between renewables and long-established power plants to facilitate an uninterrupted power supply. This switching helps smart grids to support the varying nature of renewable energy and facilitate non-stop energy supply to the consumers.

IoT Increasing the Adoption of Renewables:

The ground-breaking development of smart grids through IoT has escalated the growth of renewable energy sources. They offer amazing benefits related to power consumption monitoring and real-time alerting that allow energy utilities to include renewable sources for energy distribution. Below are some of these benefits:

Even the end-consumers are now embracing renewables to reduce their electricity bills and become self-dependent. Many countries like India are providing solar subsidies to its citizens to increase the adoption of renewables even further.

Countries help citizens to develop solar stations on their rooftop and use them for personal electricity needs. Furthermore, consumers can also discharge the excess electricity into the smart grids in exchange for money. This is helping countries to increase the overall adoption of renewables and create a greener environment for citizens to live in.

Smart grids allow energy utilities to provide consumers with a consistent power supply. The integration of IoT in renewable energy helps the energy suppliers to accommodate electricity from renewable sources and suffice the end-consumer demands.

The use of smart energy meters on a commercial level gives real-time consumption data to electricity suppliers. By using analytics and data processing solutions, they can also develop trends and patterns related to peak load conditions. Thus by using manual switching techniques, utilities can reduce the use of power plants during normal off-peak timings and run them when the electricity demand is extreme.

Thus, utilities can balance the supply and demand conditions and also limit the emission of toxic substances in the environment.

As per research, the global energy demands can be fulfilled if we can just harness 1.2% of solar energy from the Sahara desert (around 110400 km2). However, there are still several complications associated with this method. For example, building and managing such a large solar farm is not an easy task. Moreover, there will be losses linked with the transmission and distribution of electricity from such a remote location. For instance, power loss in transmission lines can reach up to 10% for long distances.

These complications and challenges are preventing the escalated growth of solar and renewable energy as a whole. Implementation of IoT in solar energy can reduce the cost of building and managing solar stations to some extent. Real-time monitoring and predictive analytics features of IoT can be used to monitor parameters that can reduce the efficiency of the power station or result in unexpected breakdowns. Hence, utilities can cut some cost related to inspection and repairs; and improve their efficiency.

IoT has enhanced the use of renewables drastically. Energy utilities are now using the renewables to provide consistent electricity flow to its citizens. The Internet of Things has already elevated the adoption of solar and wind energy. Its applications are to be seen for geothermal, biogas, and hydroelectric power plants.

As per a survey, the global geothermal resource base is even larger than that of coal, gas, uranium, and oil combined. Clearly, renewables are the future of existence. Their acceptance will gradually but definitely fulfill our growing electricity requirements.