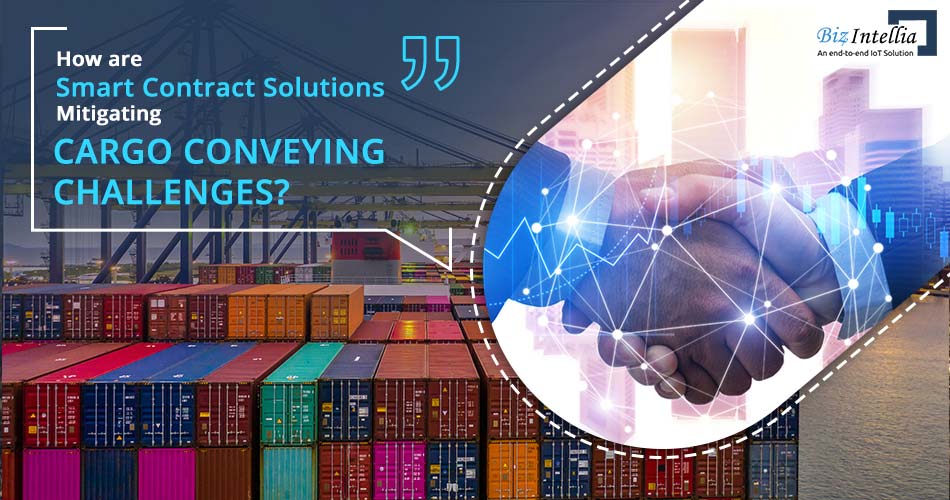 The merger of disruptive technologies has always presented out of the box solutions. One such amalgamation between Blockchain and IoT has offered the solution of smart contracts.

A smart contract is a digitally-powered contract that executes itself as per the standards set collectively by a buyer and seller. The terms of the agreement are written in the form of codes that are stored in a distributed ledger or blockchain that makes it decentralized and free from any possibility of manipulation.

While the code controls the execution of the contract, the codes are operated by the data gathered from various end devices like sensors and probes installed on the remotely located assets. This is where the technology of IoT comes into the picture.

IoT with its advanced telematics and analytics capabilities allow monitoring of parameters that describes the performance and condition of the assets. The data gathered through the sensors is processed and transmitted via gateways and concentrators to a cloud. The blockchain-powered and smart contracts driven platform hub then analyze this data to develop useful insights and check its credibility based on the contract specifications.

Generally, these contracts are used to maintain clear-cut transparency between the buyer and the supplier of a product. For example, this solution enables a logistics and transportation business to set an electronic bill of lading (BOL) between the sender and the receiver of the shipment.

These electronic BOLs make sure that all the contract terms set mutually by two parties are being complied at every stage of the cargo shipment. These contract terms can be a range of temperature that must be maintained for cold chain transportation of food or other temperature-dependent products.

In case the temperature of the container (in which the items are being shipped) crosses the pre-set thresholds, a notification is sent to all the concerned parties denoting that the contract has been breached. This reduce the chances of any discrepancies that generally arise when the receiver obtains spoiled or damaged products.

Hence, smart contracts are a revolution when it comes to the tracking and management of goods while they are in transit.

The use of smart contracts as an e-BOL has alleviated different challenges that most of the fleet handlers, truckers, and logistics business as a whole face. Let us look them one by one:

Since the contract is digitally fuelled by Blockchain, it exists in a decentralized and encrypted format. This means that the contract along with its terms and conditions is protected cryptographically, which cannot be altered even by the person who created it. Its distributed nature also ensures that it is owned by everyone and no one that further adds to its security and protection protocols.

Hence, it is impossible for anyone to change the specifications and terms of the contract once they are written and implemented.

Since IoT sensors and devices are integrated on truck-trailers that carry goods, the concerned parties can track and monitor the parameters from remote locations in real-time. Let it be the temperature of the container or the driving habits of the truck driver, all the aspects can be monitored from far-off locations. This establishes transparency in the entire cycle of the cargo delivery from the supplier to the receiver, which isnâ€™t possible from hand-written or typed contracts.

The electronic Bill of Lading is powered digitally and can be shared with multiple parties instantly. This means that the insurance companies can also be given a copy of BOL so that they can also monitor different aspects associated with the transportation of cargo from one location to another. Hence, in case the contract is breached, the insurance companies can intervene with proofs and clear visibility in the matter and help their parties to claim the insurance.

4) The physicality of Contracts:

Paper receipt based BOL are likely to be lost, torn, damaged, spoiled, or vandalized when they are transferred from one recipient to another. Smart contracts are the best way to deal with such situations. As all the terms and conditions are stored and deployed digitally, their sharing among different recipient becomes easy. Moreover, since the physicality of the contract is eliminated, no extra care has to be given to maintain them.

Trucker drivers while dealing with brokers experience very unfair payments. In the US, 40% of truckers receive late payments, while 29% of the truck drivers donâ€™t even receive money for their work at all. Since smart contracts deal with real-time monitoring of the assets being shipped, they can be programmed to conduct money transactions immediately after the shipment is delivered. In other words, the money is instantly debited from the concerned party and credited into the account of the trucker as soon as s/he delivers the package.

As IoT allow tracking of cargoâ€™s health being shipped, the need to check its condition and quality manually during transit is eliminated. This saves drivers and handlers a lot of time and cost during the transportation of cargo to manually inspect the health of the goods being conveyed. This reduce expenses associated with cargo supervision and help increase the overall ROI.

Smart contract solutions are not a forced blend of blockchain and IoT. Well, they may seem that way initially, but their applications in maintaining transparency and unambiguous visibility tells that there is a method to their madness.

The use of these contracts has already transformed the logistics and transportation businesses, but their applications even extend to supply chain management, mortgage loan supervision, protecting copyrights from infringement, and maintaining employment contracts. Smart contracts can be employed at any place where mutual consensus is difficult to be determined and terms & conditions are involved for the execution of a particular task.

Clearly, more use cases of this solution are to be identified given its growth and brilliance in reducing disputed after the contract is breached.