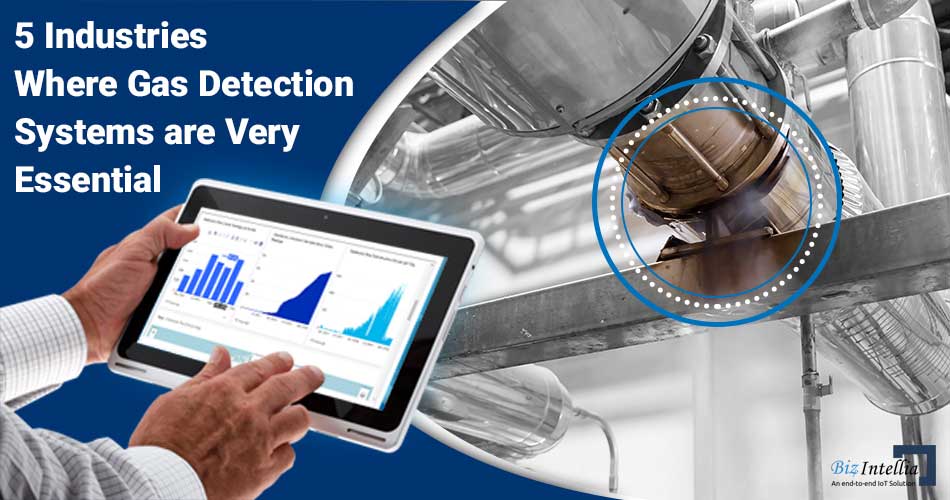 The technology of the Internet of Things has resulted in the development of innovative solutions for multiple industry verticals. Its feature in terms of creating an interconnected network of devices to collect and share data makes it a suitable enabler for telematics and monitoring tasks.

The same features of this technology have empowered the creation of gas detection systems that allow different industrial segments to supervise and control the use of toxic gases and asphyxiants in their facilities. These systems are an essential commodity in such industries since they allow them to detect leakage of noxious and explosive gases, maintain proper oxygen levels for workers, and comply with emission regulations and norms.

Whether these gases are used for manufacturing or are byproducts of any process in a facility, it becomes very important to monitor and control them. Application of gas detection and monitoring systems hence span from implementation in small boiler rooms to large scale petrochemical industry installations.

Below is a list of 5 of the most industry verticals where IoT powered gas monitoring and detection systems are a must.

Gases like Methane (CH4), Carbon Monoxide (CO), and phosphine (PH3) are a key ingredient for semiconductor fabrication. These gases are used in different places throughout the manufacturing facilities of semiconductors such as gas cabinets, wafer dryers, and wafer reactors.

Processes like deposition, photolithography, doping, and etching are along with gases as a catalyst to make reactions at the molecular level, to produce superconductors devices such as Diodes and Transistors. These gases are surely an important enabler for the manufacturing of semiconductor devices; however, they are highly toxic and can cause concussions when inhaled. Additionally, acids like HCl are also used in these companies for similar purposes, whose fumes can cause irritation and affect the respiration of the inhaler.

IoT based gas detection systems can be easily integrated into existing systems and equipment of a company, allowing easy detection of gas leakages that can result in severe catastrophe. Quick actions can hence be taken to not only prevent the spread of gas over a wide region but also identify the source of the leak and repair it.

Gases like CO, methane, and Hydrogen Sulfide (H2S) manifest in sewers due to septic wastewater present in them. Bacteria use the available oxygen in sewers to decompose and feed on the organic matter in the wastewater. They hence release sulfur compounds that react with the hydrogen in the tunnels to form H2S gas that emits the odor of rotten eggs.

Inhalation of H2S along with other gases is a major cause of death among workers working in sewers. Moreover, H2S is highly flammable and can cause an explosion when ignited.

It is hence important to use gas detection solutions, especially for H2S to protect workers from any accident. Equipment associated with such solutions helps in detecting such gases that further result in lives saved.

The oil and gas sector in its upstream, midstream and downstream segments deals with highly combustible gases that explode when exposed to high temperatures. Whether in offshore exploration or onshore refining of crude into subsequent products, there is always a chance for these gases to burst into flames.

In refineries, there is another challenge for oil companies to adhere to the environmental codes and regulations for the emission of exhaust gases. In such a case, gas monitoring solutions can help refineries a ton to control the release of harmful gases in the air. Furthermore, gas detection systems installed in specific places in oil companies can also help in detecting gas leaks, allowing authorities to take quick actions to repair the source and prevent heavy casualties.

Some manufactured chemicals are responsible for releasing harmful toxic gases that cause serious irritation in the eyes, nose, and throat. Some of them when inhaled can even cause nausea and convulsion further resulting in unconsciousness and even death. Gases that are not toxic can displace oxygen in an enclosed area resulting in suffocation and difficulty in breathing.

Gas monitoring systems in the mining sector can be used to detect the presence of flammable and toxic gases like methane and H2S in mines. On the other hand, gases known as asphyxiants displaces oxygen from mines that affect the health of workers. Lack of oxygen affects the mental health of workers resulting in their decrease in productivity and can even cause permanent mental disability.

Gas monitoring solutions can hence be used to ensure an oxygen-rich environment for workers, helping them to work without any health hazard.

Use of Gas Monitoring and Detection Systems allow industries of different verticals to prevent any casualty caused due to gas leaks. IoT sensors placed on strategic locations detect the presence of toxic or inflammable gases in a facility before their concentration increases more than controllable limits.

The real-time alert system of IoT based gas monitoring solutions enables companies to make life-saving decisions and take quick actions to evacuate the affected area, prevent fire breakout, and conduct inspection & maintenance tasks on the source of leaks. This helps them to prevent damage of equipment or assets in the facility, ensure a better working environment for workers, and most importantly save lives.