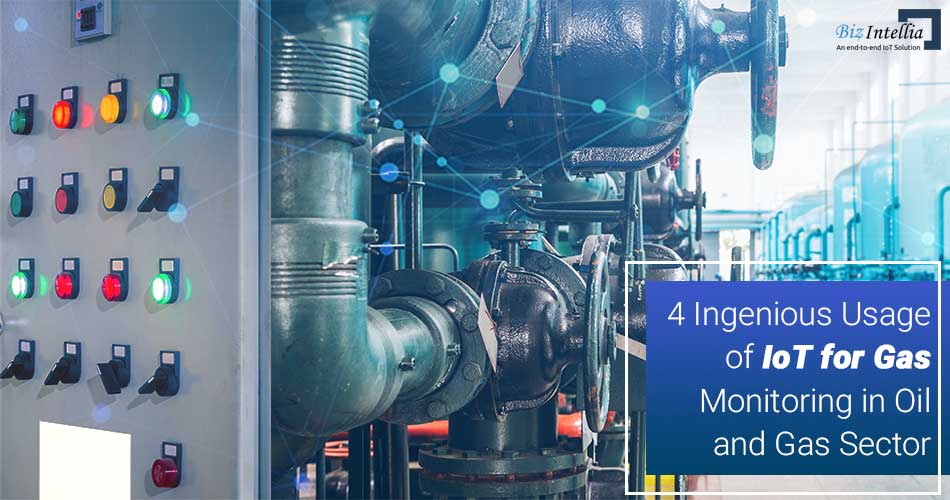 IoT in Gas and Oil

While the main function of any oil refinery is to process the crude oil into gasoline and other liquid-based fuels, it also manufactures gaseous products like propane, butane, and hydrogen. As these gases are purely hydrocarbon-based, they are easily combustible and explode when exposed to an igniting medium in an oxygen-rich environment.

Moreover, many toxic gases are produced during refining processes such as hydrogen sulfide (H2S) that can harm the health of workers. Additionally, these gases when released without treatment in the environment increases the concentration of contaminants in the air resulting in pollution and occasional acid rain.

A gas monitoring system is therefore a priority in the oil and gas sector that can alert authorities about the presence of toxic and inflammable gases in their refining plants. Gas monitoring solutions developed by the technology of Internet of Things are the best fit to develop such a system due to their remote and real-time monitoring capabilities.

Internet of Things being an interconnection technology working on different levels creates a network of equipment, sensors, and assets that share data with each other. Sensors embedded in strategic locations monitor a particular area and send an alarm to a centralized platform if gas is detected.

This gives authorities ample time to evacuate the affected area and send emergency units to handle the situation quickly. This not only saves the lives of workers in the facility but also reduces the emission of harmful gases in the environment.

Here are 4 applications of using IoT technology in the oil and gas sector:

LPG and Naphtha are the main gases developed in a refinery. However, toxic gases such as H2S, sulfur dioxide (SO2), carbon monoxide (CO), and benzene (C6H6) are produced as byproducts that are severely toxic and harmful for workersâ€™ health.

For instance, H2S when inhaled can irritate mucus membranes and respiratory tracts. Its symptoms upon short-term or acute exposure can cause severe headaches, nausea, convulsions, and conjunctivitis. To protect their employees from such harmful gases, refineries can use IoT powered gas monitoring systems to detect the presence of these gases in their plants.

The real-time alert system sends a notification to the authorities as soon as the gas is identified in a facility. Authorities can hence remotely confirm the source of the leak and can accordingly fire alarms to roll out their evacuation and safety measures. Evidently, they can then take quick actions to repair the apparatus and limit the emission of harmful gases.

Gases like LPG and Naphtha produced in an oil refinery are a mixture of very combustible and easily ignitable gases such as propane and butane. These inflammable gases when ignited, blow up in a fireball that expunges everything in its way instantly. Furthermore, while many gases donâ€™t catch fire until their concentration reaches a particular level, their high concentration is easily combustible at high temperatures.

To prevent a fire breakout, refineries need to identify leaks of such explosive gases from equipment that deals with them. High-end sensors placed around the apparatus manufacturing such gases can be used to detect leaks and alarm the authorities about probable fire breakout. These sensors can also track the concentration of such gases allowing authorities to keep them under limits.

In case the concentration of flammable gases increases, authorities can take proactive measures to evacuate workers from the facility and conduct repairs on the broken equipment before gas catch fire. Not only will such a system, save the lives of workers but also help oil companies to prevent their expensive assets from damage caused due to fire.

Gases even if not poisonous or toxic can be deadly for humans. Gases such as Methane, Butane, Propane, and Argon used in oil refineries are heavier than oxygen. Such gases are called asphyxiants and are infamous since their high concentration can displace oxygen from a place. This displacement of oxygen cause suffocation among workers that can result in unconsciousness and even death. Their presence in an enclosed environment is even more lethal since there is no ventilation for fresh air to enter the room.

Refineries by using gas monitoring solutions can monitor the concentration of oxygen at all times. In case the oxygen level in a facility decreases substantially, the alarms will alert workers about reducing oxygen, giving them a suitable amount of time to exit the premises.

The use of gas monitoring solution also helps oil refineries to keep the emission of harmful gases under control. Particulate matter, nitrogen oxides, and carbon monoxides are some of the contaminants developed at refineries that pollute the environment. While the refineries use various processes to limit the release of pollutants, they require gas monitoring solution to make sure that the emission rates are under control.

By using IoT based gas monitoring systems, the refinery can at all times monitor the gases and their amount being released in the atmosphere. They can also gain alert whenever the emission rate increases by the permissible limits. Hence, they can comply with the environmental norms and limit the degradation of air.

By leveraging the Internet of Things technology, oil refineries can garner benefits in terms of detecting gas leaks and monitoring their concentration. This has allowed them to limit accidents pertaining to fire breakout and intoxication of their workforce from harmful gases. These gas detecting systems have also enabled the companies to maintain a sustainable environment by limiting the emission of harmful gases in the atmosphere. Moreover, the applications of such a system allow companies to limit the damage to their equipment and reduce costs associated with repairs and maintenance.