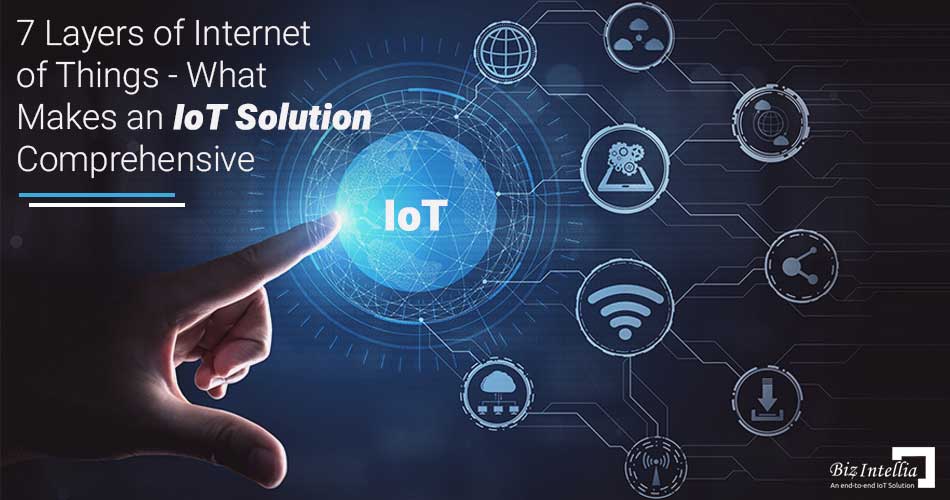 7 Layers of Internet of Things | What Makes an IoT Solution Comprehensive?

Even being one of the most trending and influential technologies of its time, people rarely know about the technology of Internet of Things in depth. While it is common knowledge that this technology assists in the creation of an interconnected network of devices, not many people know how the data really reaches from end things to their mobile phones.

There are different articles online about the way IoT works and the components or layers that form its architecture. While the majority of them are true, only a handful of them gives the exact picture behind the scene for an IoT system.

In order to completely comprehend the functioning of an end to end IoT system, it is important to know that there are 7 crucial layers on which it operates. Here is a list of all these 7 layers along with their functions in an IoT system.

Sensors and other data-collecting devices form the initial layer of any IoT system. They are the interface between the real and digital world and are responsible to convert analog to digital signals. There are different sensory devices such as meters, sensors, probes, gauges, and actuators that can read parameters like temperature, distance, location, humidity, etc. These devices are installed on endpoints (things) and collect required parameters in the form of raw data.

This layer is the first network layer of any IoT system. It is responsible for the transmission of data from the 1st layer (sensors) to the 3rd layer (gateways). The data is transferred from sensors to gateways through a specific communication protocol with its unique rules, syntax, semantics, and synchronization standards.

The data transfer can only occur if both the sensors and gateway support the transmission protocol. Some common protocols that are used for connecting sensors with gateways are BLE, LoRaWAN, ZigBee, and Sigfox.

Gateways are data aggregators that collect data from the sensors and send it to a backend system. They are basically routers or modems that act as an interface between the local sensor environment and the internet. They collect data from sensors within their range and transmit it to a data ingesting platform.

The need for gateways and sensor-to-gateway networks is eliminated if the sensory device itself has a built-in gateway or in other terms is capable of transmitting data to large distances on its own. In such a case, the sensory device only requires to read data and send it to a backend system.

In this layer, the raw data collected from the previous 4 layers is converted into meaningful information. The data in most cases is stored in cloud storage and accessed through the backend system of a mobile app or web application. The ingested data is processed via advanced analytics and other processing systems into value-added information which is displayed on the screens of the user.

This is the final network layer of any end-to-end IoT system. The raw data stored in the cloud system is called by this network and displayed on the screen of the user in the form of value-added information. The protocols that are generally used for accessing the data from cloud storage systems are internet, ethernet, and Wi-Fi.

This final layer acts as the frontend of the whole IoT system. The collected data and value-added information is displayed on the screen of the users, allowing them to track the parameter pertaining to the asset they want to monitor. The information can be displayed in the form of numbers, graphs, alerts, or charts; enabling the user to derive useful insights and make smart decisions.

The information can be accessed from any smart device such as a smartphone or desktop via a unique IoT platform that is tailored with features like real-time alert systems, analytics, and remote monitoring.

Evidently, it is not an easy task to work on all these layers and create a comprehensive IoT solution that fits everyone's pockets. There are many complications associated with choosing protocols that can effectively collect and pass on the data between subsequent layers. Moreover, developing such an architecture can make the IoT solution rigid and reduce its ability to scale properly.

We at Biz4Intellia have hence developed cost-effective COTS Internet of Things solutions that can be easily implemented anywhere. Our solution can work on every communication protocol and supports all 7 layers of IoT architecture. Click here to know about our pre-configured IoT solutions in detail.